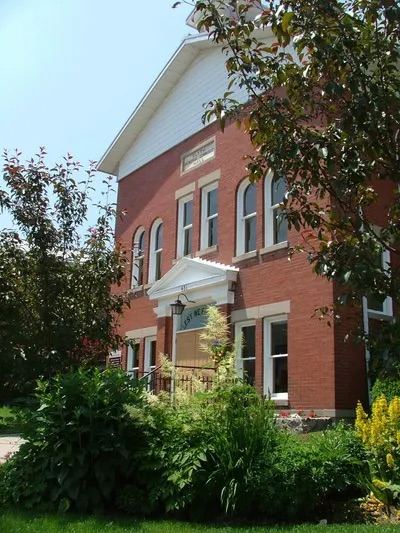 After Private Teddy Maines was killed in France in 1917, the residents of his home village of Blyth thought they had to do something to commemorate the terrible losses the First World War was wreaking.

Maines was far from the only soldier from the Blyth area to die in the conflict that began 100 years ago this summer, but the death of the 21-year-old and other local men on European battlefields helped galvanize this community.

The women of Blyth wanted a little something more than the commemorative statues that were rising up here and there across the country, and in that they were not alone.

The whole community, including the surrounding areas in East Wawanosh, Hullett and Morris Twps. got involved. The Women’s Institute purchased the land on which the building would be erected.

By the next June the new building was ready and the opening, including the dedication of a memorial plaque, was held on Sunday, June 5, followed by three days of concerts.

The community effort to build the hall, and raise the $25,000 needed (a considerable sum in those days), fostered a volunteer spirit that still thrives.

“Almost every person in the village did without to build the hall, and everybody brought their talents, whatever they were, to the fundraisings,” said local historian Janis Vodden.

“And now any project that rises in the village, we don’t have as much trouble as a lot of places do in getting volunteers. We’re a small village of avid volunteers and I think it’s a result of the hall.”

Today Blyth Memorial Hall is not just a centre for Blyth, but for all of Huron County with people coming to enjoy professional theatre in summer and top name Canadian and international talent during the fall and winter season.

The Hall has grown with two additions that allow professional-quality facilities for the theatre auditorium which make it attractive for both touring acts and the resident theatre company, as well as The Bainton Gallery for art shows.

The dreamers of the early decades of the last century would be thrilled to see the thousands of people who pass through this building, erected as a memorial to the community’s lost soldiers of World War I. Blyth’s lack of a decent hall for concerts (most concerts were held in Industrial Hall, where the Masonic rooms are today), had led to interest in building a new hall as early at 1910. It was following the Armistice in 1918, however, that momentum grew to build a concert hall as a fitting memorial to those who had fallen during the war.

The Huron Expositor reported on June 6, 1919 that a big day had been held in Blyth including people taking rides in two airplanes and a total of $2,000 had been raised, bringing the fund to $8,000. By July 28, 1920 the cornerstone for the $25,000 building was laid. The architect was W. Murray of London and the builders were local contractors. There was so much excitement about the new hall that 1,500 attended the opening, jamming the auditorium, the basement meeting room and the lawns around the building. The original building housed not just the 500-seat auditorium upstairs and the meeting hall downstairs, but the town firehall at the rear underneath the stage area. If you look closely at old photos, you can see a rope that hangs down from the bell tower to the street below. Brock Vodden recalls this was the town fire alarm and anyone who saw a fire could ring the alarm. A special clapper activated by that rope sounded a different peal than the regular town bell. He remembers being allowed to ring it once.  Former Blyth resident Pat Powell, recalled attending the opening ceremony and later visits of the Chautauqua circuit to Blyth. Cantatas such as Queen Esther and Belshazzar with casts of 60 or more produced and performed under the direction of Dr. Charles Toll, a dentist. J.S. Chellew, the local funeral director, created minstrel shows. As the needs of the fire department increased, this tiny fire hall became too small and the department moved to a new location. In 1946 tenders were called to erect a new 16 by 20-foot addition on the south side of the building where the fire hall had been. This would become the village library and new public washrooms. Inside the original building, a kitchen was created in the old fire hall space with the floor lowered to the same level as the meeting room. Given the kind of excitement the opening of Memorial Hall had created, it must have been sad for older residents to have seen the proud building’s situation by the 1970s.

Though it had been the centre of community life for decades with many concerts and plays presented, the television era and changing times had combined to see the upstairs auditorium become largely ignored except for the annual Remembrance Day ceremony on November 11.  But in the summer of 1972 a group of volunteers, organized by the Blyth Board of Trade’s President Helen Gowing, decided to clean up the hall, sweep away the dust and add a coat of paint. Ironically this act of community spirit brought the whole future of the building into doubt. There had been many changes in fire and other regulations since the hall was built in 1920. If it was going to go back into use, for instance, a fire escape was needed. Cleaning and painting could be paid for with enthusiasm but a fire escape was beyond the scope of the volunteers. They turned to village council. Council agreed to build the fire escape but had second thoughts when someone wondered about the safety of the old electrical wiring. Next came concern about a sagging of the roof. An engineer’s test proved there was a structural problem in the design of the original roof and it would have to be replaced. Now came a time for soul-searching for village councillors. Was it worth spending several times the original construction costs to replace the roof so the auditorium could be used once or twice a year? Given that the greatest use of the building was the basement meeting room, could the auditorium be blocked off and beams be put up through the theatre area to support the roof? Or should council listen to some people in the community who said the greatest need was for a larger dance and banquet hall and the building should just be torn down and replaced? In the end the community rallied once again behind the old hall. The senior citizens went after a grant. People recalled that this was a memorial and should be kept a living memorial and a poll in The Blyth Standard showed near-unanimity that the hall should be saved. So, after two years of debates, councillors went ahead and replaced the roof, though they couldn’t know that Memorial Hall was about to enter the busiest decades in its history.

Renovations were competed in late 1974. In July 1975 the Blyth Festival held its first season and since then the use of the Hall has been increasing. After a successful first season, the Festival undertook a small-scale renovation which saw the floors and woodwork refinished and the seats, which had proved sticky in the heat of the first season, repainted. By 1979 air-conditioning had been added and in 1980, an addition to the north side added dressing rooms and a fire escape that allowed the balcony to be put back into use. That addition also contained space for offices and an art gallery which later became the library for several years before it moved to Queen St. The growth of the Festival brought more changes when construction began in the late 1980s on a huge addition to the south. The “old library” addition was removed and Memorial Hall was joined to the Festival’s administration building to the south by “the link” which contains a new lobby area, new washrooms, handicapped access to all levels of the building, The Bainton Gallery and new box office facilities. Outside, main street gained a graceful courtyard. Today tens of thousands of people walk by the plaques that bear the names of the fallen of two World Wars. Memorial Hall remains a living memorial to our community’s appreciation of their sacrifice.

Since 1975, the Blyth Festival Theatre has put farmers and rural Canadians centre stage, telling our stories, sharing our history, and celebrating our way of life. A fully professional theatre, in the heart of Ontario’s bread-basket, the Blyth Festival’s ingenuity, tenacity, and creativity has irrevocably reinvigorated the region’s very imagination.